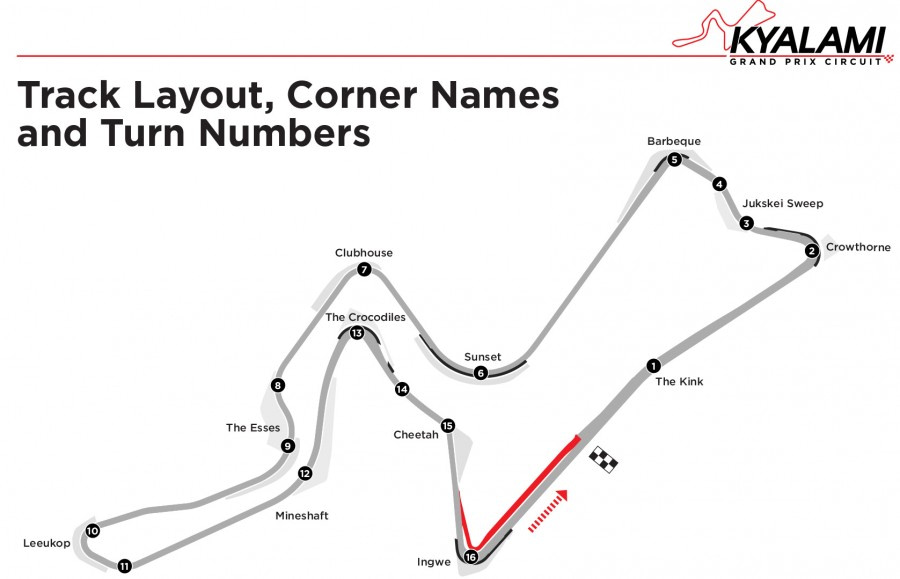 A few hundred metres after the start/finish line, the first corner The Kink, a full throttle right handed kink, awaits. Barrelling further down the straight at full throttle, the second corner, named Crowthorne awaits. The typical braking point is around the 100-metre board. A second gear left-handed corner, it tightens before opening up on exit, setting the driver up for turns 3 and 4. The Jukskei Sweep as these corners were dubbed after the re-design, are a flat-out right-hander followed by a flat-out left handed kink throwing the driver into the braking zone for turn 5. Barbeque is a second gear left-handed corner which takes the driver onto the line of the classic circuit layout. Utilising the kerb on the exit of Barbeque is necessary as the driver has a short straight to prepare for turn 6. The driver would wait until after the 50-metre board before lifting off the throttle and dipping on the brakes through the quick right-hander known as Sunset, one of only four corners left as they were in the first layout. A short burst of throttle is followed by braking at the 50-metre board for turn 7, Clubhouse, a slow left-hander typically taken in second gear. Once again utilising the exit kerb, the driver barrels down a short straight before braking, again at the 50-metre board, for turn 8. Turns 8 and 9, known as The Esses, are the final corners left over from the first layout. 8 is a medium-speed left hander typically taken in third gear, dipping the driver downhill before the car is flicked right into turn 9. Acceleration is key as the driver rejoins the new layout, going uphill before having to brake roughly 50 metres for the blind tenth corner, known as Leeukop. The driver typically decelerates and shifts down the gears to second or first gear, meeting the apex of the corner before accelerating through turn 11. The back straight lasts for a few hundred metres before the driver approaches turn 12, a flat-out left hander known as Mineshaft. Spotting a braking point for turn 13, the first corner of The Crocodiles, can be hard, as it is an off-camber right handed turn which can be taken with several different lines. Turn 14 is little more than the full throttle exit of turn 13, and sets the driver up for turn 15. Cheetah is a tight right hander which the driver typically only needs to lift off the throttle for. It’s important to carry speed through it, before spotting a braking point for the final corner. Ingwe is a slow left-hander which sends the driver back onto the start-finish straight to complete the lap