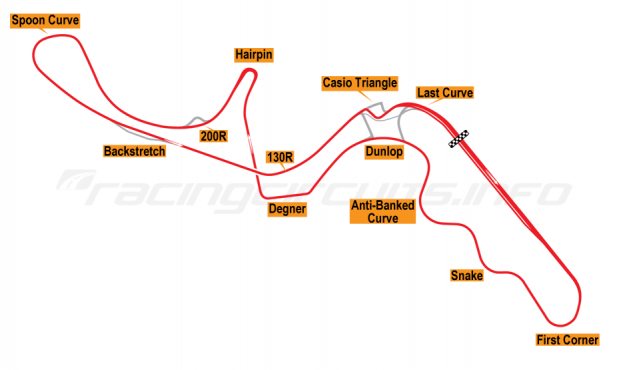 Turns 1 & 2: This whole section is pretty amazing and it’s all a question of rhythm; if you get it wrong in the first corner, you won’t be able to carry rhythm and speed through the next five corners. Turn 1 is not completely flat and every time you go there you think, ‘oh, you could’ve gone faster’ and you never really get to that last limit point and it’s really, really exciting and very demanding as well and that makes it so much fun! It’s very difficult, because you have to brake for Turn 2 and you’re leaning in the car, so you’re not breaking in a straight line. Turn 2 is actually not that slow and you have multiple lines, so you’re always feeling the car’s a little bit light.

“S” Curves (Turns 3-6): If you carry too much speed in Turn 3, you’ll be too wide and you’ll destroy your Turn 4. So, it’s always a question of judging how much speed you want to carry through Turn 3. It’s the same thing with Turn 4, you don’t probably use all of the road, because then you’ll destroy your Turn 5 and every corner until the end of Turn 6 is like that. Turn 5 is a little bit faster than Turn 4 but it goes over a hump and the car gets lighter, so you always slide out of it, which is quite interesting. Then you get to the bottom, which is Turn 6 — a corner where you just kiss the brakes. Your line through Turn 6 will allow you to go faster to Turn 7 or not, which out of all these corners is the most important one.

Dunlop Corner (Turn 7): The first years I raced there it was a corner that was almost flat out. It was super fast and very dangerous but they’ve made it a lot tighter, a lot slower and a lot easier. Now, it’s become a difficult corner instead of a ballsy corner and that’s the big difference. But the whole acceleration is through a blind, flat-out corner. You don’t see where you’re going! In the dry, it’s on the edge but it’s not so bad, but it’s in the wet that it becomes really, really complex. It’s very physically demanding. In this whole section, you’re neck is in pain because you don’t have time to rest.

Degner Curve (Turn 8 & 9): Degner 1 is a fun corner, but it’s not super important because you have to hit the brakes right after it and you just don’t want to mess it up, that’s all. Because you arrive there with quite a lot of speed but you don’t really brake, so you brake maybe for 10 metres only. It’s very hard to judge when to hit the brakes and you never know how much speed you’re actually carrying into the corner. When you brake into a hairpin, you have a long time to slow down, to really control your speed. But for this kind of corner, you just hit the brakes, throw the car in and kind of hope you’re in the right ball park. There’s a little dip in the middle, a little kink, then the car slides for the exit and as soon as you get to the curve, you have to hit the brakes for the next corner. That’s why you want to go quick through there, but not over the edge because then you’re completely destroyed for the next corner.

Hairpin Curve (Turn 11): This is a very slow hairpin, but it’s banked, which means you can’t be too wide. There are many lines and it’s a good place to surprise someone when you overtake because everyone is busy looking at the road when they hit the brakes. When you have a normal straight line and with normal braking, you can look in your mirrors, but here, you can’t because you’re too busy putting the car in the right place.

Spoon Curve (Turns 13 & 14): So difficult but so much fun! Now there’s an asphalt runoff so it’s very easy but before, it was sand and if you made a tiny mistake, you’re off and that was it. It’s not the speed through this one that’s important — it’s how you set yourself up for the second part of the corner, where you need to carry enough speed. Slowing down for the second part is not in a straight line, you’re already leaning on the edge of the car, you can’t brake hard, because it’s a very short braking and as soon as you start braking and turning in, the track drops. So, the car gets super light and it’s all blind and you don’t really see where you’re going. The car gets light when you get on the throttle as well, so it’s really, really fun to drive and important as well because of the speed on the main straight line of the track.

Turn 15: They’ve destroyed Turn 15! Now you can do it with your eyes closed, you can almost do it flat in the wet. It’s not even a corner anymore. It used to be flat a few laps in qualifying. It was exciting, risky, and dangerous and then you could really get a run into the next guy that couldn’t go as fast as you through the chicane. Now, you can almost go side-by-side. They’ve destroyed one of the most exciting corners on the track.

Casio Triangle (Turns 16-18): They moved the chicane forward as well. It’s short, so just heavy braking here. It’s a tight chicane and nothing exciting about it. You can only lose time here, not gain it. You can kind of overtake here, you can surprise someone into it but then the exit of the chicane is important, because the whole acceleration is while you’re turning, which is a little bit complex and that’s what makes it fun